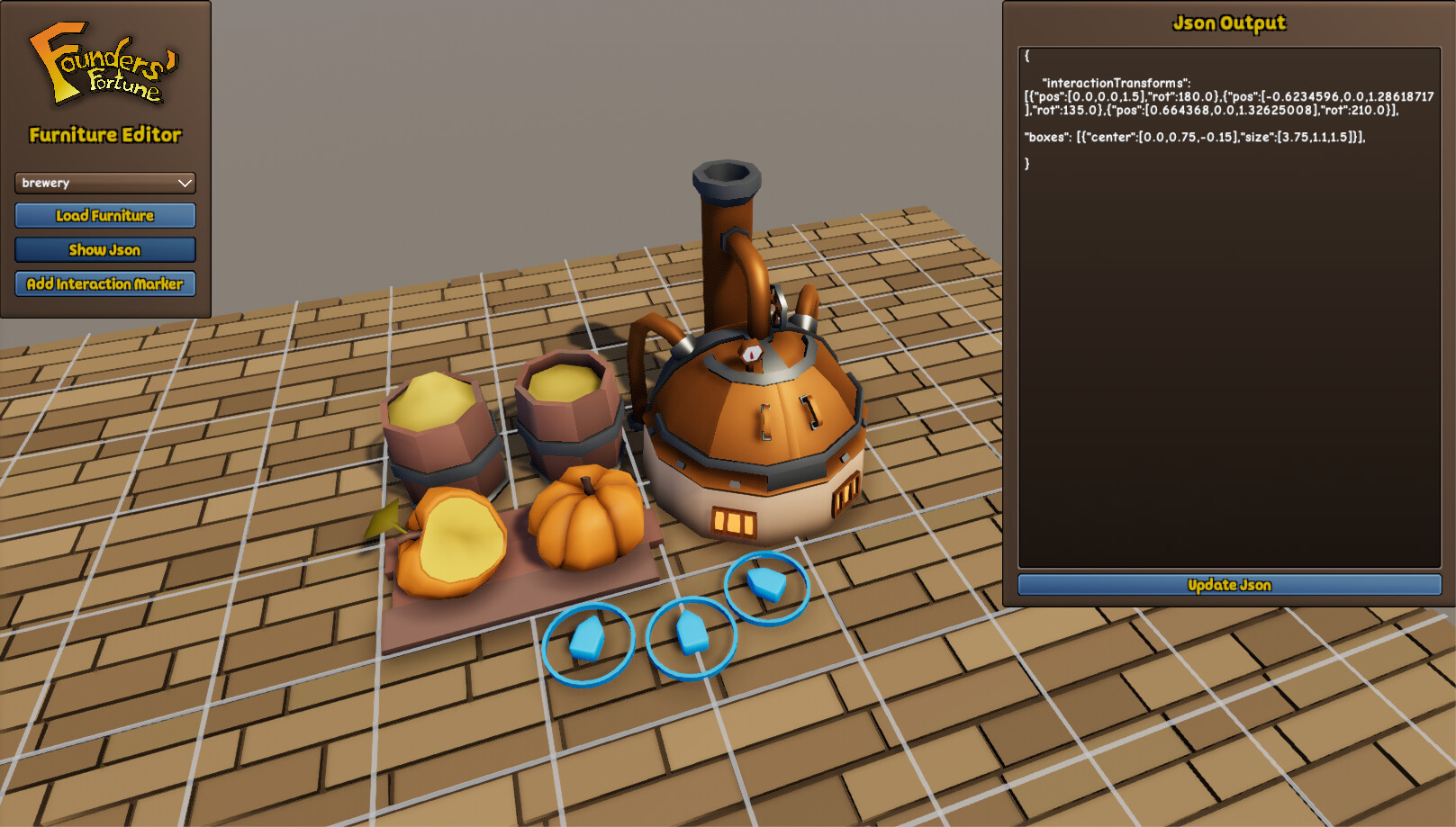 First things first: For Alpha 8, the Early Access release, Founders’ Fortune doesn’t expose any modding features. However, recently there has been a lot of discussion about modding Founders’ Fortune within and outside our community. So with the release around the corner, I wanted to give you a quick look into what the future might bring if it turns out people are into the game.

During development, we not only spent our time making the game, but we also made some tools that make content creation a lot easier. This includes tools to change the landscape, make new furniture, and integrate your own assets in the game. At the moment these tools have some quirks here and there because they were made to be used internally by the devs.

However, it wouldn’t take a lot of work, to finish up the user interface, make it a little more accessible and provide these tools as standalone applications or even as part of Founders’ Fortune itself.

We have released these kind of tools for our community before. Below you can see a screenshot of the Translator’s Dashboard. We’re very thankful that almost all of our translations were made possible by the community. In the beginning, it was important for people to check their translations in the game, so we quickly made a special “translator’s mode”, where the translators could replace the game’s text with their own translation.

This special mode also featured a dashboard which gave you additional information about mistakes in your translation (if it was unreadable by the game) or your progress in percent.

A lot of objects in Founders’ Fortune is defined as “furniture” that the colonists can interact with. To make the integration of new Furniture as easy as possible, these objects are not specifically programmed.

For example, this is an excerpt of the definition for our crystals, which can be mined for research:

Some configurations can take time, like defining where exactly colonists can stand when they interact with the piece of furniture. For these tasks, we have made another tool, the “Furniture Editor”. In the furniture editor, you can place visual markers that indicate where colonists need to stand in order to interact with any given furniture. From these markers, the tool generates .json configurations which you can use in your configuration file.

Integrating with our code

Some mods are only possible if you dig deeper and interface directly with our game code. Our game is made with Unity and therefore it’s written in C#. It’s possible and explicitly allowed to decompile the game code for educational or modding purposes.

If there is a lot of interest, we can provide more infrastructure to load custom code and allow deeper modifications of the game code.

As a test run, we built the supporter packages as mods

Interest in mod support has been growing, so as a first test run, we implemented our Supporter Packages as mods. The supporter packages are small pieces of DLC available on our website, which we made as a thank you to our greatest supporters.

These packages feature custom furniture, armor, and hats. In order to make them usable ingame, we had to make an external asset loading procedure which we could also use to load mods.

What do you think?

I hope this post gives you an overview of the tools and opportunities available for Founders’ Fortune modding. If you think we should make these tools available so you can make your own mods or if you would just like to see mods as a player, let me know in the Forum.